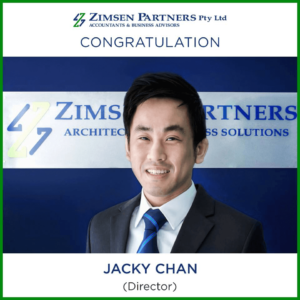 Jacky Chan has been newly appointed as one of the Directors of the firm alongside Terry & Dancy. Jacky started as a Graduate Accountant in the firm in 2013; he has excelled in the fields of business advisory and taxation ever since – being promoted to Senior Accountant, Manager and eventually an Associate. Besides holding a CPA, Jacky has recently obtained his RG146 SMSF Personal Advice Qualification and has also become a Registered Tax Agent.

Alongside Jacky’s success, the firm has experienced rapid growth and is constantly recognizing individuals for their accomplishments and hard work; notably the following individuals who have been promoted to their new roles:

Congratulations to all and best of luck for the new Financial Year.

The Importance of Specialised Business Planner for Fast Growth

We have often heard about the vitality of business planning for companies in their early stages of development. However, business…

The Advantages of Debt Restructuring Advice from Experts

All small and medium-size businesses require funding to operate and grow. While some business owners manage to bring sufficient capital…